Paris founded around 259 BC  on the right bank of the Seine river  by the Celtic tribe of Parisii, is the second most populated city in Europe after London, with 12 million inhabitants, known as the city of light, because it was the first city in the world illuminated with electric light.

Paris is a city that seems designed for the traveler’s enjoyment. Its streets, gardens, squares, walks, castles, museums, monuments seem to have been built for tourism and to enchant its visitors like magic, so that when you visit them for the first time you will always want to return again and again .

Visiting the Eiffel Tower, Notre Dame Cathedral, Arc de Triomphe, are unforgettable experiences, as well as participating in a show at the famous Moulin Rouge cabaret, a dinner with the love of your life on the river Seine, stroll through some of its picturesque districts like Montmartre and Montparnasse, or simply walk and buy some souvenir in the Champs-Élysées, is something that you will never stop to remember.

How to plan a  weekend in Paris?

First, inform yourself about Paris, its urban rules, its means of transport, its sites of interest, pre-purchase all tickets for visits and shows, look for accommodations near the metro stations, and above all fill you emotionally with wishes to enjoy your visit.

Best places to visit a weekend in Paris 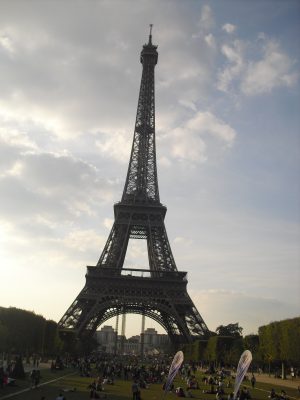 Let’s begin, with arrival Friday afternoon, once your accommodation is located, you can have time to get out and do a couple of things before returning to sleep.

Visit to The Eiffel Tower, a 300-meter-high iron architectural jewel designed by Gustave Eiffel, was created for the Universal Exhibition of Paris in 1889. It is now considered the most representative symbol of Paris.

With your map of Paris in hand, locate the nearest metro station, take the train to the station of Trocadéro, when you leave the metro you will start to see the tower and the fields of Mars where it is located.

If you did not buy your ticket previously, you can do it at the ticket offices located at the entrance of the tower, currently prices range from $ 7.5 to $ 18.3 per person, are several sections, you can climb stairs or elevator, of course, you must arrive to the top of the tower, from where you will have a magnificent view of all Paris.

After the visit to the tower you can have time to have a dinner, in Paris you can find many restaurants, all of the categories, the most popular and economical are in the old Quartier Latin, one of the most lively and affordable for dinner. To get there, take the RER (Réseau Express Régional) on the Champs de Mars – Tour Eiffel to the Saint-Michel-Notre Dame station where you can find a nice place to your liking.

After dinner you will have time to walk the streets of Paris and see the illuminated monuments, crossing any of the bridges of the river Seine, you can reach the Île de la Cité from the Quartier Latin and visit Notre Dame, built between 1163 and 1245 , The Notre Dame Cathedral in Paris is one of the oldest Gothic cathedrals in the world. The name of the cathedral means Our Lady and is dedicated to the Virgin Mary.

For Saturday, you can combine three activities, the first one, in the morning, visit Paris on board a panoramic bus, in the afternoon walk, and finish the day with a romantic dinner in the boats of the river Seine, or participate in a show at the Moulin Rouge.

A panoramic tour of Paris is the perfect excursion for a first trip to Paris.  This service offers several departures a day from its office located in the heart of Paris, very close to the Louvre. After a visit of the city of approximately 1 hour and 30 minutes, returns to the same place from where the tour begins. The whole process of buying and confirming tickets is via the web.

On board these air-conditioned panoramic coaches you can learn more about of the history of the city in a dozen of different languages, the units have an audioguide with individual headphones. So, you can discover the architectural heritage through the main districts of Paris, as well as its large squares and avenues. During this visit to the city without stops, you can contemplate the great monuments of Paris, the bridges over the Seine and the museums that house much of the cultural and artistic wealth of the city, such as: Place of the Opera Garnier, Louvre Museum, Paris City Hall, Pantheon, Orsay Museum, Place of the Concorde, Avenue des Champs Elysees, Arc de Triomphe, Hôtel National des Invalides among others.

The Arc de Triomphe is another architectural monument of Paris city, designed by Jean-François Chalgrin, built by order of Napoleon Bonaparte in 1806, at the end of the battle of Austerlitz, but its completion culminated 30 years later during Louis-Philippe’s term.

With a height of 50 meters, historically it is considered as a symbol that represents the victories of the French army under the orders of Napoleón.

The Opera Garnier, also known as Garnier Palace or Paris Opera, according to Wikipedia, “is one of the most characteristic buildings of the 19th District of Paris and the cityscape of the French capital.” Napoleon III ordered its construction to the architect Charles Garnier, who designed it in neo-baroque style.

After the tour in the Autocar, you can take a light lunch and prepare for an afternoon of walking along the streets of Paris, starting at the Louvre Museum, opened in 1793, as the official museum of Paris, with eight millions of people their annual visits, the collection of the Louvre is estimated at about 300,000 artworks dating back to 1948, of which approximately 35,000 are exhibited, the cost of ticket is: adults  € 15, young under 18 years and citizens of the European community between 18 and 25 years old  free admission.

After visiting the museum and leaving  on the north side you will come to the Avenue of the Opera, this commercial street was built by Napoleon III to communicate the Louvre with the Garnier Palace, surrounding this building, you can find the Boulevard Haussmann, where are located the Galeries Lafayette and Printemps, two large department stores in the city. Continuing in this area, you can walk to the metro station Grands Boulevards, where you can find the Hard Rock Café and the Grévin Wax Museum.

If you continue walking, you can take Rue Montmartre until you reach Blanche Square, where you will find the world famous Moulin Rouge, then head east on the Boulevard of Clichy you will arrive to the Anvers metro station, where you can take the Funicular, that  began operating in the summer of 1900, which will take you to the top of Montmartre where you can visit the Basilica of the Sacred Heart and if you follow the tourist route you can culminate the walk in the folkloric Place du Tertre, Painters’ Square.

For the last day trip you have several alternatives, the most economical to take a dinner and stay in some place around the Plaza du Tertre before returning to the hotel, the next a little more expensive, a romantic dinner while cruising in the Seine river, embarking from the charming port of Arsenal near the Bastille, which has departure times 18h and 21h, priced approximately $40 per person, and the third, most expensive, take a dinner show at the Moulin Rouge, schedules 21h and 23h, with an estimated cost of $190 per person.

For Sunday, depending on the schedule of the return trip, it is important to bear in mind that for international travel it is necessary to arrive at the airport at least three hours in advance, and that the RER trip to the airport can take another hour, for which, if the return is in the afternoon, only a couple of things could be done in the morning.
First of all, a visit to the Invalides, an imposing architectural complex formed by the Hôtel National des Invalides, built in the 17th century as a residence for retired French soldiers, and the Church Saint Louis des Invalides built between 1677 and 1706, the royal chapel happened to become a pantheon where the sarcophagus is kept under the cupula with the ashes of Napoleon I.

The nearest metro stations are Invalides, Varennes and La Tour-Maubourg. Next to the Invalides is the Rodin Museum, and crossing the esplanade of the Invalides is the Alexandre III bridge, one of the most beautiful in Paris, ahead the Grand Palais and the Petit Palais, the latter with entrance Free of charge, then following Churchill Avenue you can culminate your weekend visit to Paris on the Champs-Élysées, with a length of almost two kilometers communicating the Arc de Triomphe and Place de la Concorde,  where you can buy some souvenirs before embarking on your journey back to your country.